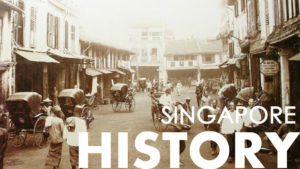 It is believed that mariners discovered Singapore in the 3rd century and by 7th century the place had established itself as a primary trading outpost acting as the supply and entry point for Indian, Chinese, Javanese, Thai, Arab and Malay traders.

Although it has been proven that lions never inhabited Singapore but during the fourteenth century, an auspicious beast was spotted by a Sumatran prince on the island. This led to the name Singapore which comes from Malay words “Singa” which means lions and “Pura” which means city. Before the Europeans started settling on the island, it served as site for Malay fishing village. The island was also home to hundreds of Orang Laut people.

In the 15th Century
It was in the year of 1511 when the Melaka port was captured by Portuguese explorers which forced reigning sultan of the area to flee towards south. A new regime was established which came to be known as Johore Sultanate in which Singapura was part of the governing land.

In 1613, a trading post was burned down by the Portuguese located close to Temasek River. After that incident, most part of the island remained abandoned. This was the main cause behind the shifting of planting and trading activities towards south to Sumatra and Riau Islands. By the early part of the nineteenth century, planting activities resumed at Temasek and in 1818, the area was settled in by a Johore Sultanate’s Malay official along with his followers and the island served as home to several Chinese planters and indigenous tribal people.

In 1819, Sir Stamford Raffles, obtained permission from the British East India Company to set up a trading post on the island. He named the island as Singapore and developed it into a port suitable for free trade and immigration. By 1827, among the different ethnic groups of the island, the Chinese population increased considerably arriving from different parts like Riau, Penang, Melaka as well as various parts of Malay Archipelago. Singapore was the 3rd British acquisition after Penang and Malacca. In 1832, the island served as centre of government for Straits Settlement of Malacca, Penang and Singapore.

Post the 18th Century
The opening of Suez Canal in 1869 along with the introduction of steamship and telegraph helped with the expansion of trade between the West and the East. The prosperity of Singapore attracted immigrants from different parts of the region and its population quickly grew from 150 to nearly 80,000 consisting mainly of Malays, Indians and Chinese.

It was during the 2nd World War that Singapore came under the occupancy of the Japanese. After the end of the War, Singapore was faced with critical issues like slow economic growth, high unemployment, decaying infrastructure, social unrest and labour strikes. But all these problems account for the rise of political awakening which ultimately led to the rise of national and anti-colonial sentiments. It was in the year of 1959 when Singapore was declared as self-governing state under British Empire and ultimately, sovereignty was declared officially on August 9th, 1963.

The Modern Singapore
After getting separated from Malaysia, Singapore started focusing more on the economy. Singapore started promoting labour extensive, export oriented industrialization so as to attract investment from foreign nations. The strategic location was the biggest advantage available to the country. By 1972, nearly a quarter of manufacturing firms of the country were either joint-venture companies or owned by foreign investors. The steady political climate along with rapid expansion of world economy and favourable investment conditions helped to increase the GDP growth of the country to double digits.

The private sector created more job opportunities and by the 70’s, the focus shifted towards technology and skill-intensive industries instead of labour intensive industries. By 1990, more than six hundred and fifty multinational companies started operating in Singapore along with several thousand trading firms and financial institutions. The rugged individualism of the country is now more focused on excellence.

History is the mirror to the future. Strong and effective governance has led Singapore to become the advanced nation of today.